Apprentice Morales out to fast start at Ellis 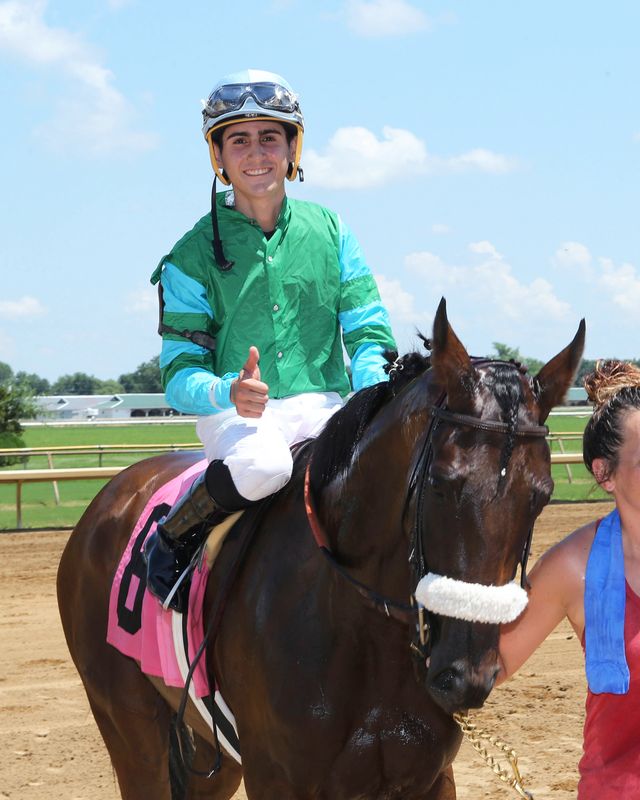 The three wins tie Morales for the lead heading into Friday’s card with Jack Gilligan, another young jockey working hard to make a name for himself in Kentucky. (Note: James Graham won Friday’s first race to pull into a tie for the lead.)

HENDERSON, Ky. —Having begun his riding career only last October, apprentice jockey Edgar Morales is off to a fast start at Ellis Park, with three wins, a second and four thirds in 14 mounts so far this young meet.

The three wins tie Morales for the lead heading into Friday’s card with Jack Gilligan, another young jockey working hard to make a name for himself in Kentucky. (Note: James Graham won Friday’s first race to pull into a tie for the lead.)

“It’s a long meet yet, but we’re off to a good start,” said Julio Espinoza, the former jockey who is Morales’ agent. “I’m looking forward to having a big meet, maybe even leading rider.”

Said Morales: “This is my first year here. But with the good horses, the trainers giving me the opportunity and a good agent, we’re doing well and working hard. … It’s a tough meet here, too, but we’re working hard, paying attention and keep trying.”

Morales is the 20-year-old brother of Roberto Morales, a veteran jockey currently riding in Louisiana. The brothers are from Puerto Rico, known for its state-run jockey school that has launched greats such as John Velazquez and young standouts Jose and Irad Ortiz. Not that it’s easy getting started even with the training of that well-known school, but Edgar Morales said his family lived more than two hours away, he had no car or anyone to take him. Morales knew he wanted to be a jockey, but he was going to have to do it from the school of hard knocks.

He said he finished regular school and came to Louisiana two years ago to work at Evangeline Downs as a hotwalker and then groom, progressing into an exercise rider. He went to Miami with trainer Efren Loza, who also has horses stabled in Kentucky and who brought Morales to Kentucky.

“I wanted to ride races, but it was slow because I didn’t go to the school,” he said. “So I kept learning more and more.”

Morales launched his riding career at Keeneland on Oct. 6, winning for the late Jack Van Berg and his son, Tom, with his fifth mount. He won 17 races at Oaklawn Park over the winter and 11 this spring at Churchill Downs. Also riding at Indiana Grand and occasionally at Mountaineer Park, Morales has 49 victories overall, including a handful of wins at Churchill Downs and Keeneland.

“He’s come a long ways,” Espinoza said. “His brother sent him to me. He’s one of the smartest riders I’ve ever had. He listens, first of all, and he’s naturally intelligent anyways. He’s polite, quiet. Everybody likes him, and that’s a big key.”

Said trainer John Hancock, who teamed with Morales to win a race named for the trainer’s late mother on July 4: “Very talented young man. I’ve drunk the Kool-Aid. He rides two for me (Friday), one Saturday and three on Sunday. He reminds me a lot when Rafael Bejarano got hot.”

Like Morales, Gilligan won two races on Wednesday then tacked on another one by taking one of the two held Thursday.

“A good way to get started,” Gilligan said after the races Wednesday. “I had a second and third opening day, and with two wins, great start to the meet. Hopefully it continues now. We’ve got a good bunch of mounts this week, and go to Arlington on Saturday and ride one for Michelle Lovell who has a big shot as well. Everything is going good.”

Gilligan rides Dubby Dubbie, a two-time allowance winner at Churchill Downs, in Arlington Park’s Grade 3 American Derby. The 3-year-old gelding is 5-1 in the morning line for the turf stakes.

The hot trainer is Chris Hartman, who is 3 for 4 with a third. Hartman won Thursday’s first two races Thursday and was in the paddock to saddle a third when the remainder of the card was called off because of extreme heat and humidity.

A year ago, trainer John Hancock’s barn surprised him with having an Ellis Park race named for his mother Bivian B. Hancock, who had died over the winter. Bivian was the matriarch of a prominent racing family, one of her son’s long-time clients and partner but also was revered in Henderson County for 50 years as a caring bus driver for the school system.

This year, Hancock carefully planned the memorial race, getting it as the third race on July 4, in which he had American Alphabet running. All that was left was for American Alphabet to win the $7,500 maiden-claiming race, which she did by a length, paying a surprising $10.60 to win.

“It wasn’t as easy to do as everybody thinks it was,” Hancock reflected Friday morning in his barn office, the blue horse blanket with his mom’s name in big white letters. “The people in the barn surprised me last year with sponsoring the race after my mom, because she meant so much to so many people and she meant so much to me. I knew this year I wanted to do it myself. So when the opportunity came up, and this filly was doing really well, I said, ‘OK, we’ll take a shot.’ When the (entries) came out, I thought this would be a good spot. It wasn’t going to be easy. There were two or three fillies in there as capable as she was, but I thought, ‘This is the spot to take a shot.’ It was a holiday and I knew there would be a lot of family members here. And we got lucky. We were really fortunate. I was just amazed that she paid $10. I couldn’t believe she was 4-1.”

So what would have that blanket presentation been like had American Alphabet not won?

“It wouldn’t have been any different,” Hancock said. “I looked at the entries and knew if I got beat, I was going to present the blanket to somebody I knew who would understand what it meant to me. Vickie Foley, we grew up back here on the backside together. It wouldn’t have bothered me if she had won it. To me, Vickie lives in Louisville but she group up here at Ellis Park, she and her brother, Greg. One of the other choices was a filly I bought as a yearling and broke. I sold her a couple of months ago to Rick Jordan’s owners. I pretty much knew if I got beat I’d be giving it to somebody who knows what this blanket means. It was special anyway it went. It just turned out to be better than I won.”

As it turned out, the Vickie Foley-trained Curlabella finished second.

“I was handling it really well when they turned for home and she made the lead,” Hancock said. “This filly has a bad habit of just kind of ‘hanging.’ I said, ‘Oh man, here we go. We’re going to have to ride this down the lane.’ Everybody was rooting for it. The (grandstand) steps were full and they were all screaming and hollering. And Jimmy Mac (announcer Jimmy McNerney), I’ve known him since he was born, and he got into it. You could tell it meant a little something to him, too. The last two or three calls, right before she got to the wire, was unbelievable. We were standing in the winner’s circle, and they were getting ready to present the blanket. I looked up and Jimmy said, ‘She was known on the backside as Ms. Punkin.’ I looked up at the tote board and said, ‘This one is for Ms. Punkin.’ And there was a picture on the tote board of myself, my wife and my mom.

“Then, it got me. My mom was my world. My mom not only had three sons, she had more people she called her kids than you could ever imagine. I got a phone call from a gentleman yesterday who said he wanted to be here but couldn’t. I knew this gentleman, but I hadn’t seen him in 15-20 years. I was getting those phone calls for two days.”

Hancock says the Bivian B. memorial race will be an annual tradition. “Every year there will be a blanket for my mom,” he said. “My grandson, he understands what it means, and my daughter. I’m sure if something was to happen, they’d carrying it on… If I don’t win another race this summer, I got the one I wanted.”

Hancock trains a 2-year-old named Bivian B., owned by Gatewood Bell and Hancock’s wife, Donna. “That blanket will be on Bivian B. when she walks in the paddock” to run, he said.

“He goes, for sure,” Lexington-based trainer Ben Colebrook said in reference to the Painter colt’s name. “He’s been working really well. Then in the last work, I worked him with a filly that I love, and he outworked her. I was kind of like, ‘Wow, I thought she’d outwork him.’”

Knicks Go broke on the rail, which can be especially problematic for a horse that hasn’t raced before.

Colebrook says he has his young horses “ready to go” first time out, but not all the way cranked for a best effort, wanting to develop the horse for the long haul.

The $75,000 Ellis Park Juvenile on Aug. 19 is a possibility for Knicks Go, as is a stakes at Saratoga, Colebrook said. The dream goal is the Breeders’ Cup Juvenile at Churchill Downs.

“James thinks he can go farther, which he obviously is bred to do,” he said. “The only concern I had was the rail and I thought five-eighths would be too short for him, honestly. But he’d done nothing wrong up to this point, so we had pretty high expectations. But any time Steve Asmussen has one in there, you always have to worry about him. We thought if we hit the board we’d be thrilled.”

Colebrook has other promising 2-year-olds that he expects to run at Ellis Park, including Claiborne Farm’s Heels, the Flatter filly who worked with Knicks Go.

“You get a good read on your 2-year-olds now at Ellis,” he said.

Note: Saturday’s ostrich race is scheduled to go off about 2:50 p.m. Central, or shortly after the fifth race. The camel race should go off about 4:10 p.m., or after the seventh.