Jockey Kassie Guglielmino a Rising Star in the Pacific Northwest

Kassie Guglielmino steps out of the jockey’s room at Portland Meadows and sees a friend. She smiles a smile that is bright enough to light up the gloomy Pacific Northwest skies. She watches the horses as they are saddled, looks outside to see if it’s raining yet and heads to her mount. As they leave through the tunnel on their way to the track, her hand automatically reaches up to touch the beam overhead.  On it someone has written “Luck” with a couple of horseshoes. It’s primitive and rustic. The white paint is smudged from years of being touched, tapped or patted. In horse racing, rituals and traditions are important. She is one of several jockeys who observe the custom. There is an interesting change in her demeanor once she is on her horse. Her game face belies her competitive nature and her eyes remind me of Hall of Fame jockey Gary Stevens. They’re the eyes of an eagle in focus and ready.

This life on horseback for a young 23-year-old woman might seem an anomaly for some. Her parents say their daughter is a jockey and people respond “A disk jockey?” Horses have been a part of her entire life.  “I don’t have many memories of not being on a horse.” She remembers sitting with her father in his saddle riding before she could walk. She even had a horse that her parents referred to as her “babysitter.”

Growing up on a cattle ranch in rural northeast Washington state had many wonderful advantages.  She rode saddle and ranch horses. She barrel raced (which she loved) and did junior rodeo. She honed her competitive spirit while running track in high school and won 12 individual state championships. Yet there was something else that she wanted to do. “I wanted to be a jockey. I just didn’t know anyone who had race horses until I was 17.” A family friend helped her get started in Canada at Sunflower Downs in Princeton, British Columbia. 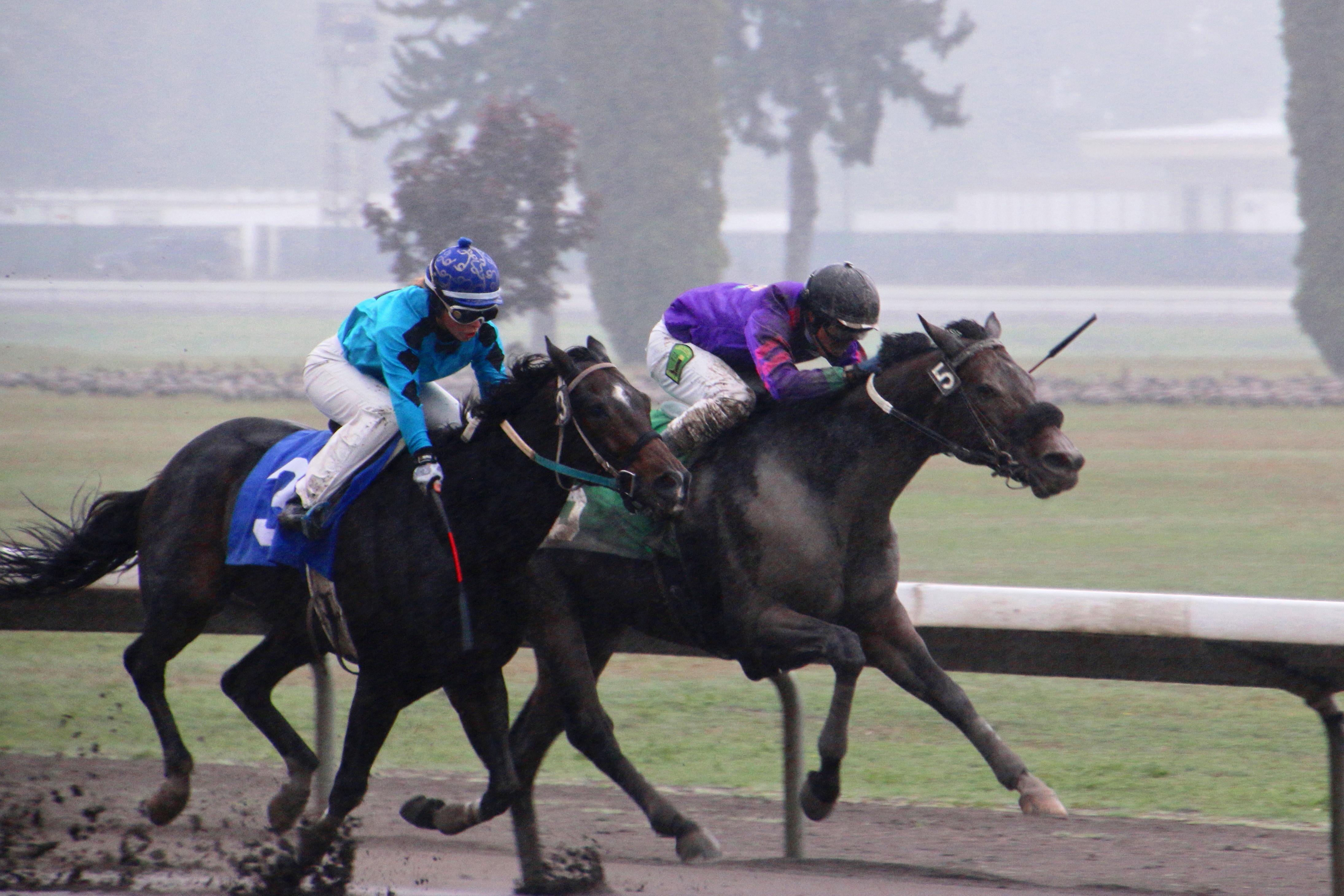 During her third race (ever) she was riding Absolute Magnitude. Unfortunately, they went down on the second turn. She was knocked out, broke her nose and ended up in the hospital. Her parents were terrified. But that didn’t stop Kassie.  She remembers her first win with a grin. It was on the same horse one month later at Kin Park in Vernon, British Columbia. They broke sharply, rushed to the lead and drove home for the win. An absolute thrilling ride for a fearless teenager. How did it feel?  “It was pretty crazy. I was hooked from the start.”

She rode just a handful of races in Canada her first couple of years because it was close to home and she was still in high school. She went to a year of college in Montana and travelled to the Rocky Mountain Turf Club in Lethbridge, Alberta, and rode a few races there. Now she rides both Quarter Horses and Thoroughbreds at Portland Meadows where she had a great meet last year and was honored as their leading rider for the 2016-2017 meet.  She holds the award proudly in the Ladies jockey room and her eyes shine. “It was probably my first really good year that I have had at Portland Meadows.” She pauses in reflection and then lifts her head with a beaming smile. “It was a lot of fun. Hard work but enjoyable!”

As she grew up, she lived only a few hours away from young Jake Samuels. Their schools played each other in sports.  She remembers crossing paths with him at the Canadian border but she had one more year of high school and went back to school. They met again at Les Bois in Boise, Idaho, and she was convinced to try out racing in Oregon. They were friends and rode against each other for several years.  It’s easy to see that they were destined for each other. Jake rode in the famous Omak Stampede as a teenager. He is also blessed with a high voltage smile and a fierce competitive spirit.

They were married in 2017 amidst an idyllic setting. When they look at each other, the air crackles with electricity and the world closes around them. They spent their honeymoon on the race circuit and now ride predominantly at Portland Meadows along with some fairs in Oregon, California and Nevada. They are extremely popular in Grants Pass, Oregon. “It’s good. We met on the race track and have been riding against each other for quite a while now. It seems pretty normal.”

She gallops in the morning when the track opens and then works out. “Growing up on a ranch and being around horses my entire life helps. It helps to get along with every horse I get on. I broke horses before I ever came to the race track.  People would pay me to break their 2- or 3-year-olds.  I would ride them in the mountains. I think that it was good experience before ever getting on a race horse.  I’ve learned horsemanship and understand some horses because I have been around horses every single day for my whole life. I think that especially helps a lot with problem horses. Sometimes they want something a little different. You need to learn how to get along with them and not make them get along with you.”

She mentioned Nita Juanita as a particularly interesting horse. She is an older mare that is “one of a kind who is kind of hard to get along with because she doesn’t like people. The only one who could pet her was her trainer.” Kassie had been trying to win a race on her for several years. “She won for me last year at huge odds and then won two in a row after not winning for two years. It was a cool feeling for me. A lot of hard work went into that win! She was always second or third and we couldn’t get the job done. Then we won at the Oregon-bred stakes. I can pet her now. She likes me but she is very picky about her people.”

A special win?  That would be on Cantchaco who is a 6-year-old Oregon-bred gelding. She won the Lethal Grand Oregon Sprint Champion Stakes with him at Portland Meadows. “He went wire to wire on a hand ride and almost broke the track record. He was doing it so easy. That’s a win that stands out for me. He was really outstanding that day!”  She explained that “to be a favorite a lot of times you build a bond with the horse in the morning. There are some horses that give you their all every time you go to the track. That is what makes you really respect them.”

A horse that conquered her heart is Seattle Diner. He ran 57 races in his career and Kassie won three races on him. She told the owners that she was interested if they ever retired him. He now lives at the ranch and is her saddle horse. He made several adorable appearances in their wedding photos.

Jake and Kassie knew that they also wanted to rescue a dog. When Jake was riding in Fresno, Kassie looked on line at a shelter at the race meet and saw a very special dog. She told Jake “I want this one!” and he went to the shelter and brought “Jersey” home from California. Jersey was really skinny, sick and had kennel cough. She had been found in a box by the side of the road. They brought her back to health and she has thrived. She thrilled them by winning the dog race at the Kennewick meet! She goes everywhere with them and even rides Seattle Diner with Kassie in a stock saddle.

What’s it like to have two jockeys in the family? She says that they “watch TV and talk horses a lot and try to talk about other things.” They like to go out on the town for dinner or a hockey game like any young couple or stay in and watch horse racing on TVG. It’s interesting to watch them when they race each other. Sometimes they come out of the jockey’s room at the same time. They smile at their friends, pose for photographs and will wave at fans. The second they turn towards the horses it’s “GAME ON!”

You can tell that Kassie has a competitive fire burning within her. No more eye contact as she puts all her focus on her horse. She mounts easily and sets about the business of adjusting her reins. Her husband is just another jockey as they duel down the stretch and Kassie puts everything into winning.  This time he won. She dismounts onto the muddy track and gathers her tack. Even though Jake is right in front of her, there is no friendly banter or eye contact. You can tell that Kassie is replaying the race in her mind as she quickly weighs in and returns to the jockeys’ room. Her face reflects the loss and she doesn’t take it lightly. She is already making notes in her mind about the next time she is on the track.

Western Jockeys’ Guild Representative Darrell Haire thinks the world of Kassie and Jake. “Kassie is a good person. She works hard and is a determined young lady. Jake is outgoing and rides hard. He is my go-to guy as the local Jockey’s Guild Representative. The two of them have a strong work ethic and great personalities. They are great people and are good for the game.”

Kassie returns from another race and lands lightly on her feet. The rain batters her face but she doesn’t feel it as she places her hand on the side of the horse she was riding for an intimate moment. It’s the last race of the day and the heavens have opened up into a traditional Portland rainstorm. As I leave, I see several rose bushes at the entrance and despite the harsh weather the roses in bloom are still beautiful even in the pouring rain. Beyond the roses is a rainbow. One can often find beauty where ever they go especially at the track whether it’s the horses or the strong personalities of the riders.

Kassie Guglielmino grew up in a horse family and she loves riding. She is a strong competitive young woman going the distance one ride at a time. Like the rose in the rain, she shines through no matter the weather. Determined, diligent and dynamic she takes on life as she drives down the stretch. Whether she is in a duel run with her husband or flying on the lead wire to wire, she will find the best in herself and in her horse. It’s a race worth watching even in the rain.